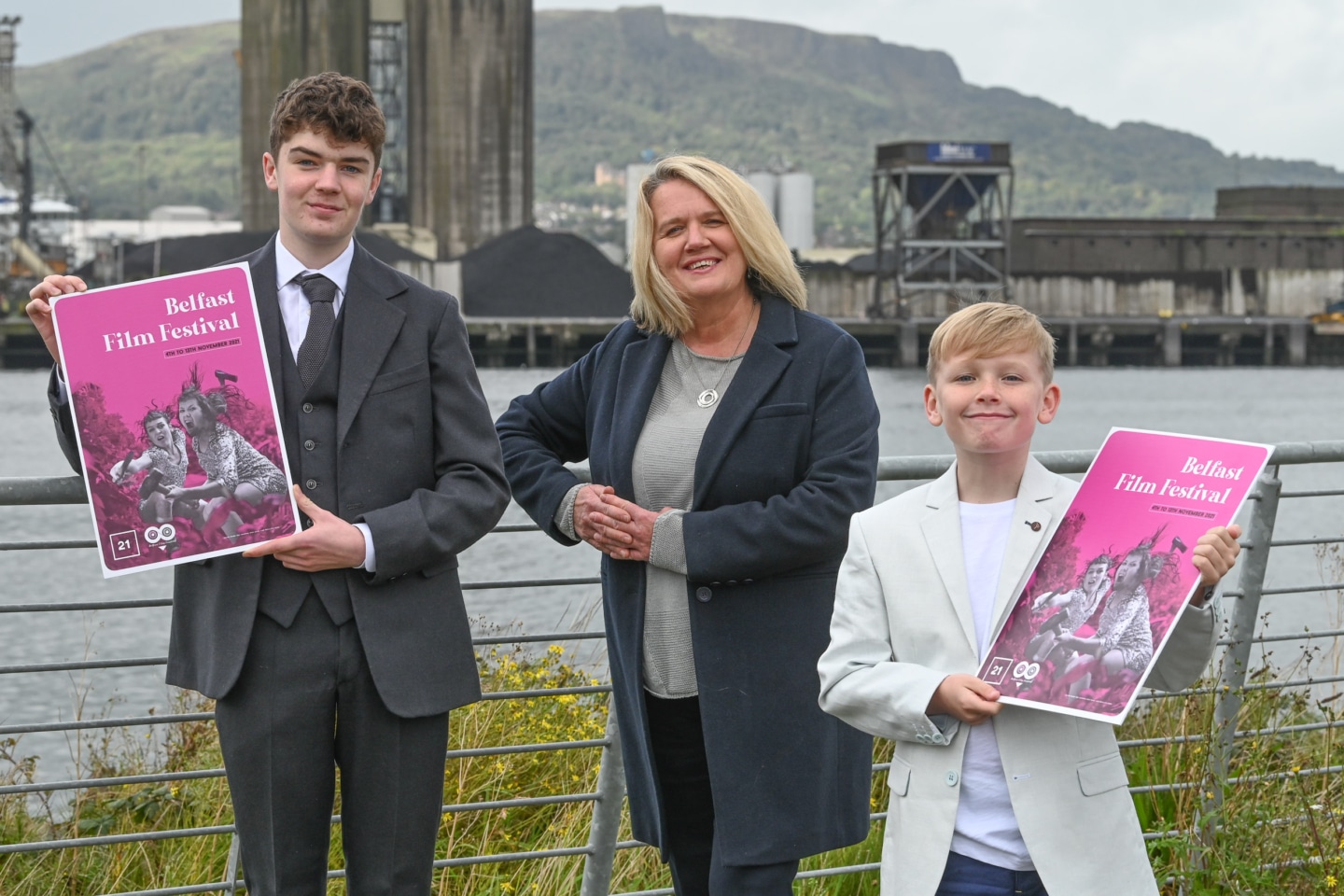 ‘Belfast’ the latest film from acclaimed director Kenneth Branagh, and now the Toronto International Film Festival People’s Choice Award winner, will have its Irish première at this year’s Belfast Film Festival at The Waterfront Hall.

The award-winning film is a poignant story of love, laughter and loss in one boy’s childhood, amid the social and political tumult of the late 1960s. It stars Caitríona Balfe, Judi Dench, Jamie Dornan, Ciarán Hinds and introduces 10-year-old Jude Hill.

The special event, which opens the 21st Belfast Film Festival on the 4th November, will be introduced by Branagh himself and attended by some of the film’s A-list cast in what will be a glittering homecoming night for the film.

Tickets for ‘Belfast’ will go on sale on Friday 8th October at 10am.

Bringing It All Back Home is the theme of the 21st Belfast Film Festival which  features a plethora of Irish talent, new films include a psychological thriller starring Andrea Riseborough, ‘Here Before’ written and directed by east Belfast’s Stacey Gregg; a special screening of the gripping occult tale ‘Mandrake’ directed by Lisburn-born filmmaker Lynne Davison.

The Irish première of filmmaker Alison Millar’s documentary on the life of murdered journalist Lyra McKee will première at the festival. Looking at the career and life of the young writer, as well as exploring the tragic incident that resulted in her death in 2019, ‘Lyra’ was made with the involvement of her family, friends and partner.

To mark the 100 year point since the partition of Ireland and the establishment of the Northern Irish state the festival will host a special hybrid live music / film archive event.  Steering clear of thorny constitutional material, this event will bypass clichéd representations of the North by collating hundreds of clips of happier times during the past century. ‘100 Years of Happiness’ will take place at the Common Market and features a live performance from The Organanuts. This event is supported by Film Hub North with National Lottery funding on behalf of the BFI Film Audience Network.”

Belfast Film Festival Chair and internationally acclaimed filmmaker Mark Cousins will screen one of his latest documentaries, ‘The Storms of Jeremy Thomas’ which takes an in-depth look at the illustrious career of Oscar-winning producer (‘The Last Emperor’ 1988) Jeremy Thomas, through a road trip Cousins and Thomas take from London to Cannes.

Commenting on his attendance on opening night Kenneth Branagh said:

“I am fortunate to have attended film festivals throughout the world for this most personal of films, but it was always my hope that we might be invited to bring ‘Belfast’ home. To be included as a part of the Belfast Film Festival is a great honour for us. This year’s festival is packed with local talent in all areas of the industry from acting and directing to producing, and shows the phenomenal strength of the film industry here. It is great to see our young actors, Jude Hill and Lewis McAskie appearing in not one but two feature films in the Festival and demonstrates the depth of new acting talent.  And I couldn’t be more delighted for Bríd Brennan receiving a special award; a truly great actress, and a cherished collaborator from the earliest days of my career”.

Richard Williams, Chief Executive of Northern Ireland Screen “We are brimming with pride that this year’s festival includes films from local directors Stacey Gregg, Mark Cousins, Damian McCann, Lynne Davison and Alison Millar and that their films are so diverse and wide ranging in their themes and storytelling.  That the local directors are being led by Kenneth Branagh, who brings his film ‘Belfast’ back to Belfast to open the Belfast Film Festival at the Waterfront Hall, makes this a truly remarkable festival programme timed perfectly to bring confidence and enthusiasm back to the cinema going public.”

“Belfast Film Festival is certainly ‘bringing it all back home’ this year with a much needed sprinkle of stardust, as we welcome home some of our most internationally successful filmmaking talents. The calibre of films being screened is inspiring, showing that cinema is well and truly back, and in particular, celebrating Irish film as it continues to thrive on the international circuit.

We are thrilled to host the Irish première of Kenneth Branagh’s ‘Belfast’. A real full circle moment as the writer/director returns to a city much changed to that depicted in the film.

Since the tragic murder of Lyra McKee in 2019, director Alison Miller has been working alongside her loved ones, to tell the story of Lyra, her friend.  Alison’s film is both a painful and joyful tribute to the late journalist, a beautifully crafted testimony of a young woman, her untimely death and its devastating impact.  The film is edited by Chloe Lambourne (‘For Sama’ 2019) with a soundtrack by multi-award winning producer/composer David Holmes.

We are thrilled to welcome many other homegrown filmmakers, both new and experienced, including Bríd Brennan and Jim Sheridan who will join us to celebrate their impressive careers. We look forward to welcoming filmmakers and audiences back to 10 days of guests, talks, music, film and togetherness in front of the big screen … we’ve missed you.”

A host of special guests will participate in the festival in a series of events including;

Gemma Herdman from United Wines: “We are delighted to once again join forces with Belfast Film Festival to deliver another fantastic programme of events this November. Birra Moretti is a quality, premium beer, produced following a strict process which has been almost unchanged since 1859. Enjoyed by both the male and female consumer, the brand’s positioning as a cosmopolitan beer, which celebrates its authenticity, make it the perfect partner for the Festival. After what has been a challenging year for both the cinematic and hospitality industries, we look forward to celebrating the talent and creativity in both through our involvement in this exciting partnership.”

Film screenings and events will take place both online and in cinemas and venues across Belfast including Odeon Cinema, Queens Film Theatre and Common Market.

To find out more about the full programme visit Whats On.