Last year’s Virtual Reality Studio went down so well we decided we had to bring it back! Virtual Reality headsets create a 360 degree viewing experience that completely immerses the user in different VR universes.

We’ve converted The Barracks theatre space into a VR studio with comfortable seating to experience the films. And what a line up of films we have. Whether you want to experience a rocket launch into space, be scared out of your wits in a hotel similar to The Shining or experience beautiful, colourful animation in a forest, we have something for everyone.

Check out what we’ll be screening in our Virtual Reality studio below.

Click here to make booking for a 1 hour session (on arrival you can select the content you want to see. Booking is a £5 per session – the donation covers cost of technician and venue). 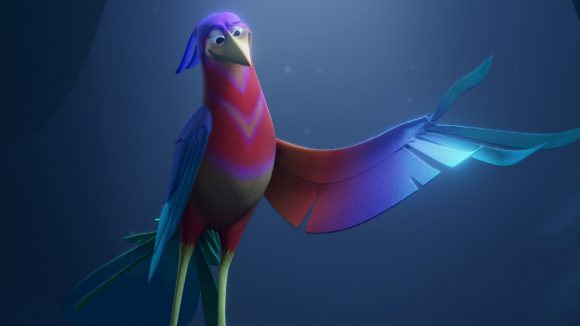 Crow is the most admired animal in the forest with his magnificent colours and beautiful voice. But when the very first winter arrives, can Crow make the personal sacrifices needed to save his friends?

“There’s a lovely richness to the animation style and colour palette that invites the viewer to look around and really get a grounding for where they are in the scene. The characters almost seem to be right in front of you, close enough to pick up and sit on your lap.”

At a dinner party in 1961, Betty and Barney Hill reveal the true story behind their baffling claims of a UFO abduction. When the Hills were not able to remember and reconcile the details of the inexplicable event, they sought hypnosis. At a dinner party they played their recorded hypnosis to their friends, revealing radically different accounts of the abduction.

“A dinner party, a space of safety and community, is transformed through the abduction into a place of estrangement and otherness. It is this theme where the cohesion with not just Virtual Reality as a medium but also immersive theatre lies, both taking power from the blurring of the real and the constructed.”

Strap into a rocket ship and blast off into space in this groundbreaking recreation of the 1965 Voskhod-2 rocket launch.

At a creepy hotel on a cold winter night, a couple stops to rest. But something is amiss.

“Franbo VR, an indie studio based out of Bristol, UK, has created some iconic interiors inspired by The Shining (1980) in a short VR experience called The Caretaker. Distilling some of the film’s atmospheric insanity, the experience lets you walk the halls of the isolated Overlook Hotel.”

This 13-minute immersive documentary explores the psyche, and post-prison life of Rickey Jackson, who was wrongfully convicted of murder in 1975 and served 39 years in prison until the Ohio Innocence Project helped exonerate him in 2014.

“We wanted Send Me Home to urge participants to reflect on the expanse of their own lives in relation to the time Rickey lost—which we achieved by shifting the participant’s role between being a guest in Rickey’s home to being a guest in his mind. Our hope was that this one story of injustice, of time and opportunity lost, would shine a light on the larger systemic issues within our criminal justice system—a flawed system that does not always protect innocent people.”

– Short of the Week

The film whisks viewers to the remote Island nation of Kiribati, which is located in the central Pacific Ocran and has a population of just over 110,00 native people called the Gilbertese. The island is gorgeous, with white sand beaches, thatched huts and pristine wates. It is also in immediate danger of being swallowed by the sea due to a swiftly rising ocean.

“Anote’s Ark VR takes you on a journey to Kiribati to bear witness to one of the biggest challenges facing humanity.”

Based on the Oscar short-listed Participant Media documentary Zero Days, Scatter’s award-winning, immersive documentary Zero Days VR visualizes the story of Stuxnet in a new way: placing you inside the invisible world of computer viruses, experiencing the high stakes of cyber warfare at a human scale.

Zero Days VR explores the next chapter of modern warfare through the true story of Stuxnet: the first cyber weapon in the world known to cause real-world physical damage.

“Zero Days VR gives viewers a chance to experience things they might not otherwise be able to, like exploring an Iranian nuclear facility and seeing what a cyber army looks like.”