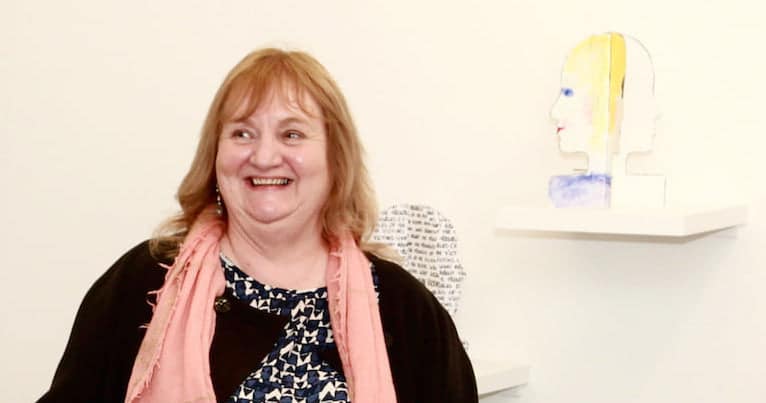 The staff and board of Belfast Film Festival were deeply saddened to hear the news of the sudden death of Marilyn Hyndman, co-director of NVTV on Saturday the 22nd of January, aged just 68.

We would like to extend our heartfelt sympathy to Dave Hyndman on the loss of his partner and colleague of more than 50 years, and to their children Sinead, Conor and grand-children who have lost their beloved mother and grandmother. Condolences also to Marilyn’s wider family and friendship circles both here and in England, and to the Northern Visions team who are all coping with the shock of this great loss.

Marilyn was a cornerstone of Northern Visions and of the arts sector in Northern Ireland for many years, she inspired generations of artists, musicians, filmmakers and activists across a broad spectrum of equality issues.  Through her work with Dave, Northern Visions and NVTV she supported hundreds of individuals and communities across Ireland and the UK, with training, hands-on practical guidance and encouragement.  Many went on to become film-makers setting up their own companies, professionals in various roles in film & TV production, community activists, arts practitioners and much more.

In 1986 her documentary Under the Health Surface: As Told By Belfast Women was broadcast by Channel 4 and many other programmes she produced have been aired on NVTV and elsewhere.  In 2012 the film Good Vibrations, featured a young couple working with Teri Hooley on his endeavours with young musicians, that couple were Dave and Marilyn Hyndman played by Michael Colgan and Mary Lindsay.  In 1996, she published a book, Further Afield: Journeys from a Protestant Past was published by Beyond the Pale Publications, it is a collection of 40 accounts of what life is like for working class Protestants who do not fit the traditional mould, the book made a significant contribution to political debate in Northern Ireland.

Working with Belfast Film Festival and Belfast Exposed in the early 2000’s together we secured European funding to establish the media building at 23 Donegall Street, Marilyn was the driving force behind the success of that move.  Under her guiding hand the work of the community television station, NVTV began in the building in 2004, and has flourished there since, its’ success a testimony to her determination, expertise and vision.

Marilyn Hyndman was campaigner for social justice her name was synonymous with Just Books anarchist bookshop; the Belfast Women’s Collective; Belfast Arts Lab; Northern Visions, NVTV;  Her vision was one of a “democratised form of media, where new technologies are utilised as a tool for expression and creativity, to effect social change and combat poverty, social exclusion and isolation.”  Her death seems so surreal, Deirdre Robb and I were sitting in a meeting with her and Dave as usual just a few days ago talking about new developments for the building.  When I heard she was ill I thought, she’s a determined, strong woman, she’ll pull through, but alas she didn’t.  Losing her is a  massive blow to NVTV and to the wider arts sector, she was a trojan worker and a powerful force for good, for many many years and across a wide spectrum of communities here, she will be sorely missed.
Michele Devlin, Belfast Film Festival Director

Shocked to hear Marilyn is gone. Her impact will never be forgotten. She was an early pioneer of independent film making in Ireland and a stalwart fighter for human rights, especially abortion rights here in the north.
Margo Harkin

Gutted to hear this news yesterday. Marilyn & Dave were integral to the development of a radical culture in Belfast from the late 70s onwards. Marilyn was intelligent understated and profoundly principled.
Marie Mulholland

Deeply upset to hear this, I first knew Marilyn when I was a young teenager at Just Books, herself and Dave ran the print workshop on the top floor, I was amazed at all the hard work she did then with two young children on tow. The hard work continued with the journey from printing to eventually a community television channel, what an achievement, what a woman
Theresa Crickard

Marilyn and Dave were the Print Workshop over Justbooks in the 80s, reluctant mentors to many of us and parental figures to learn from and rebel against, unlikely anarcho-punks, founders of Northern Visions and more. Marylin was also an active member of 70s and early 80s feminist groups. Her and Dave supported us in Women’s News in many ways, including letting us use their typesetting machine and then their computer for years until we finally got our own. Many, if not most of the radical publications in Belfast in the 80s were printed at their place.
Catherine Couvert

She enriched the lives of all of us who knew her, radiating a gentle warmth that encouraged us to stretch ourselves that little bit more. Her legacy will live on though the work of Northern Visions and in the hearts of many who are now grieving her loss.
Roisín McDonough 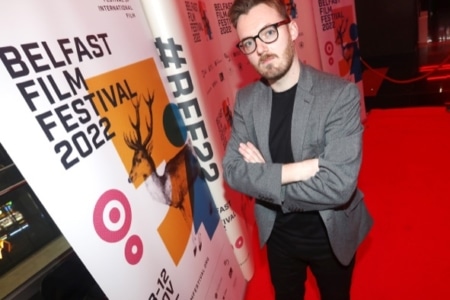