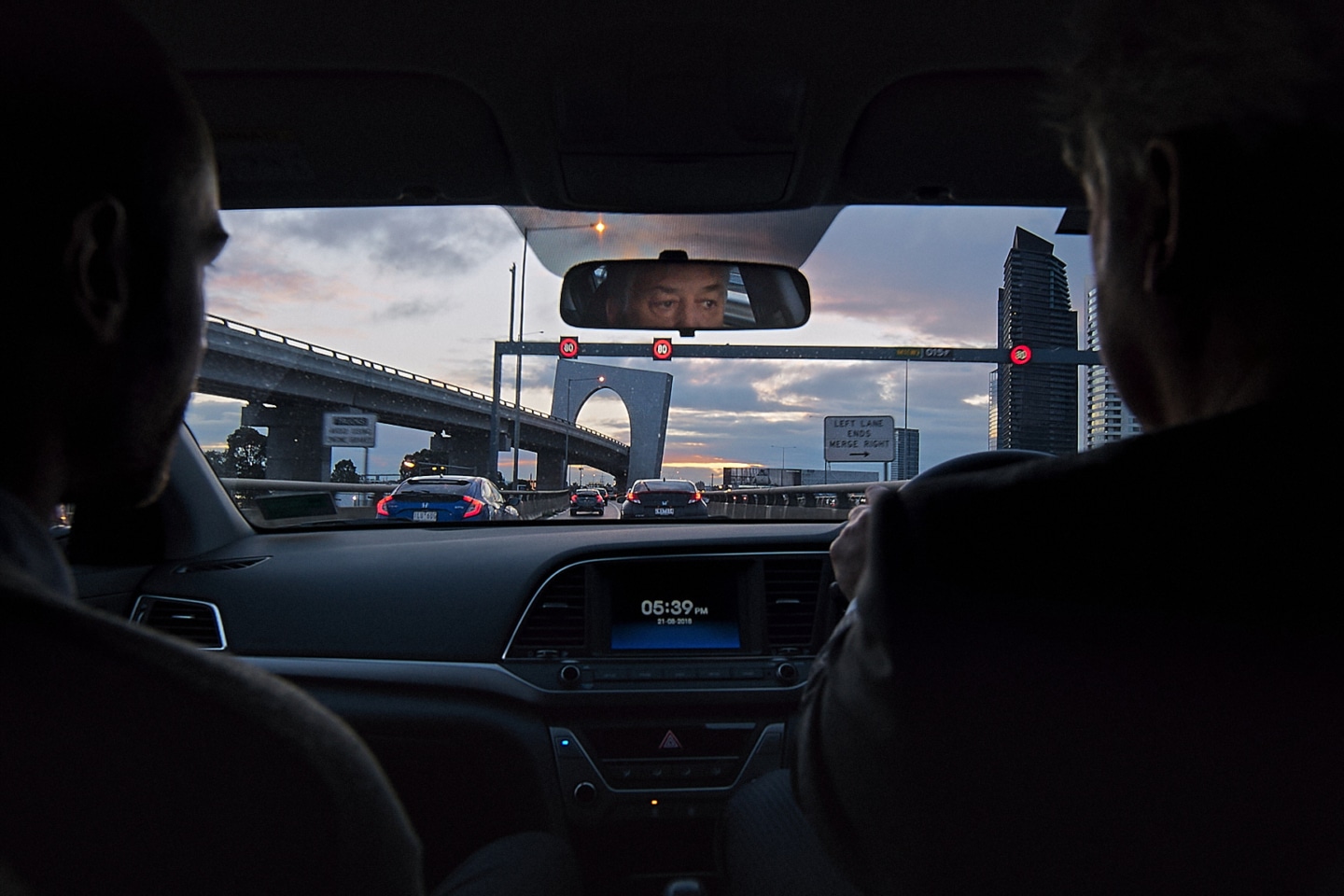 I don’t drive. Except for a few halfhearted lessons carving lazy, reckless infinity loops into the sand on Dublin’s Bull Island under the reluctant tutelage of my sister, I never learned how – as a lifelong city-dweller, I’ve never needed to. One side-effect, though, is that I’m a world-class passenger. I love to be driven, I am great at being driven. I love the weird intimacy of it and, in a way, the surrender of control. It’s similar to the experience of going to the movies. You are seated, you are right there, but you’re also on your way somewhere else and have to trust someone else to bring you. With my talent – one might even say genius – for being driven, David Easteal’s remarkable The Plains could have been made just for me. Except I know too many people, drivers and non-drivers, for whom it feels exactly that way too.

The idea is almost confoundingly simple: A motionless camera, positioned in the back of a Hyundai looking forward, observes Andrew Rakowski, a middle-aged Melbourne lawyer on his commute home along the same unspectacular route he has driven every working day for the past 13 years. Sometimes he is alone, sometimes he gives his co-worker David (Easteal himself) a ride. But whether he’s chatting to David or on the phone to his wife Cheri or his ailing mother – and even when he’s not talking at all – Andrew is always somehow in conversation with the world, and with us. It makes The Plains strangely momentous for a film in which so little happens, as it carves out a fluid stretch of in-between time when the smallest prompt causes plumes of thought to billow out, filling the interior of the car, the movie, and the mind with incident, before dissipating again into companionable silence.

When I was little, my parents would sometimes take me along on evenings out or to dinner parties in friends’ houses. I would be bored and fidgety, unless distracted by a restaurant fishtank or another kid my age, whose toys were always so much cooler than my own. I don’t remember much of those times. But I do remember the drives home after dark, lying across the backseat, drowsing and dreaming while streetlights threw hypnotic repeated patterns across the roof of the car, knowing when we were approaching home by the sway of the turns into our cul-de-sac, and by the rhythm of the bumps under the wheels. I often say I love to travel, but The Plains makes me think back to those cocooned childhood car journeys and realise that maybe what I love even more is to be a passenger.

Over its luxuriant running time, the film makes a lot of very ordinary things seem heroic. Andrew’s ritual of calling Cheri on the handsfree to check in about dinner and how her day has been. David’s reserved but warm relationship with his older colleague. The turning of the seasons, tracked when the windscreen-glare of the late-afternoon sun gives way to the swishing of wipers against the rain. But it’s the quiet valorisation of passengerdom, where the average road movie revs up the mythos of the driver, that is its most unexpected pleasure. The Plains understands the paradox: enclosed in the back of a mid-range saloon with a stranger for three hours, you can feel completely and limitlessly free.

Jessica Kiang is a Berlin-based film critic with Variety, The New York Times, The LA Times, Rolling Stone, The Playlist and Sight & Sound, and the International Programmer for the Belfast Film Festival.